So where were you this morning?  Were you in Europe gazing into the skies around 9am (UTC) or had you already given up and gone inside because of the cloud.

We weren’t too sure what to expect given only partial eclipse status in southern Europe and a forecast of cloud.  We decided though we had to give it a try. 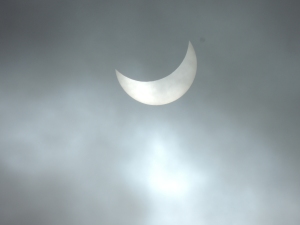 The last full eclipse we watched was in August 1999, neither of course being around for the one before that in 1927!  We were on the Isle of Wight then, and we like many others headed for the military road. My memories of that morning, apart from my mad rush to leave work on time (think there must have been the unique summer bed crisis) was the drop in temperature and the birds suddenly going quiet.

Well this morning it was not quite as dramatic – not only was the eclipse only going to be partial but it was cloudy.  Also very noticeable how most of Olhão were just getting on with their day!

About half hour before the maximum there was no cloud, hopeless for taking photographs but we had great fun creating our own eclipse gazing equipment.  I did consider the colander option but in the end Robert juggled binoculars and card.  We got some pretty good shapes too on the card. 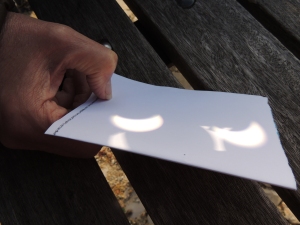 As the maximum moment approached the temperature dropped significantly, and unfortunately, we thought, the cloud came in.  But then we realised it was now perfect for taking photographs. The first two below were all taken shortly after 9am, and then third about 9:20am. 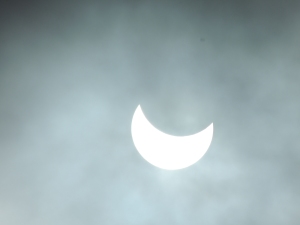 And the final one, not long before it was all over  – around 9:40am – here in the Algarve. 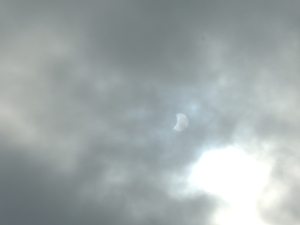 5 thoughts on “Experiencing the Solar Eclipse”