If you have ever been to Lisbon, in fact if you have ever seen pictures of Lisbon streets, then the ‘Calçada Portuguesa’ will have almost certainly have caught your eye. This unique style of cobbled pavements which began life in Porto (but took on a life of its own in Lisbon) can be found across Portugal as well as in Brazil and in former Portuguese colonies. 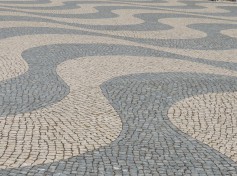 We first walked across them in Madeira where the half moon shapes in Funchal caught my eye. We next saw them in Vila Real de Santo António where the main square is almost as dramatic as Lisbon squares. It is not just pavements and squares where you will find, many entrances and market halls have used them and even the streets in villages in the hills have simple designs.

The origins of ‘Calçada Portuguesa’ are Roman and Arabic, but the patterns and style we see now stem from 19th century designs. It is skilled work, and in fact a School for Pavers was opened in the late 20th century. Generally the cobbled pavements you will be walking across will be made from limestone and basalt, or varying shades of limestones. The limestone probably is from quarries in the Aire and Candeeiros mountains, although there are smaller quarries dotted elsewhere including the Algarve. 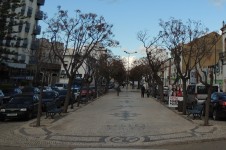 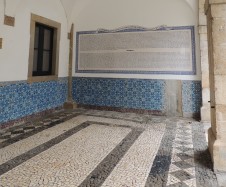 Understandably the cost of maintenance and repair is significant. 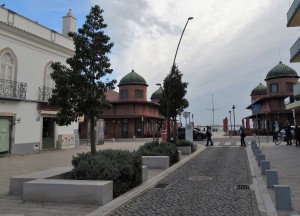 Which may explain, given Portugal’s economic woes, why some councils are replacing pavements and squares with slabs rather than limestone cobbles. It caused uproar in Olhão when this happened but the slabs remain. If you are wondering by the way where my info has come from there is an 179 page manual on ‘Calçada Portuguesa’ detailing history, usage, application techniques, paving terminology, patterns and standards. It is written in both Portuguese and English, the English commencing from page 140. I found it is surprisingly interesting considering is is a manual on stone!

15 thoughts on “Behold the beauty of Calçada Portuguesa”