Every morning was foggy during our three days in Mértola this week, and so there were no stunning Alentejo sunrises for me. However the early morning skies over the rooftops were still dramatic.

And to my delight just around the corner from our accommodation I discovered a street full of yarn bombed trees. The fog was soon forgotten (partly because it was lifting!) as I went from tree to tree. 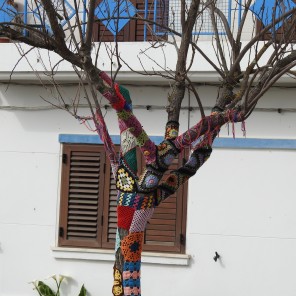 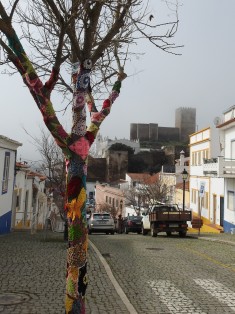 Yarn bombing apparently started in Texas earlier this century, although it wasn’t until about 10 years ago that it became the worldwide phenomena it is today. There are mixed views about the impact of tying crochet and knitting to trees, with some expressing concern it is environmentally unfriendly. However these knots didn’t look as though they were tied tightly, so can’t imagine these are restricting growth or the sap rising. 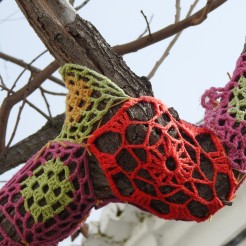 I’ve not been able to discover who is behind this wonderful display in Mértola, although I did spot a few painted signs at the bottom of some of the trees indicating that different parishes or areas within the district had produced them. This would make sense as many of the villages to the north and west of Mértola were once renowned for their lace making, their blankets and woven carpets, so crochet designs would be a breeze for them. Whoever created it though I am grateful as it certainly brought a smile to my face on a foggy morning. I am also in awe of their talent,; a pom pom is the most I can manage! 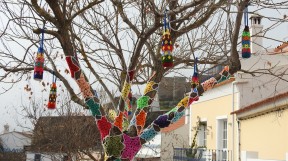 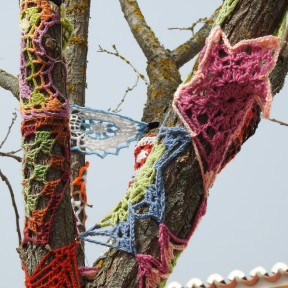 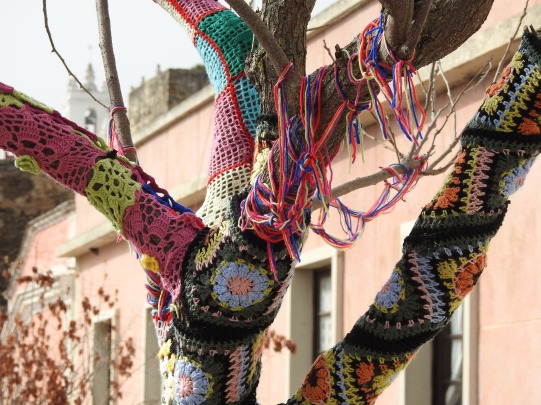 If you are after even more splendid creations than these then there are plenty to be found. For the last few years in Vila Nova de Cerveira, in the far far north of Portugal there has been a yarn bombing festival every summer. There they cover whole houses in crochet. If you are in the vicinity between July and September do visit as it looks incredible. If though you are not planning on heading that far north this summer then there are other towns in Portugal which have crochet movements, and also quite a few in England, Just look at this Yorkshire delight discovered by Restless Jo last year. 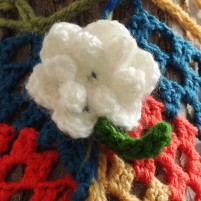 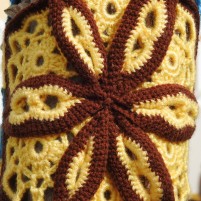 PS Did you notice my title? This is a Six Word Saturday; to discover more Saturday delights visit Debbie at Travel Intent. Some may have even stuck to six words unlike me!

42 thoughts on “‘Crochet guerrillas’ have arrived in Mértola”