Our walk was taking us beside one of Portugal’s lesser known rivers – Riberia de Foupana  – as well as two favourites of ours Riberia de Odeleite and Rio Guadiana. The Foupana, is relatively unknown despite being one of Portugal’s longest rivers. It rises in the Serra do Caldeirão, and meanders through the hills before flowing into the Odeleite, just a couple of miles before the Odeleite flows into the Rio Guadiana. The Foupana has a very strong current, at times torrential, in the winter. Not that you would think so from where it joins the Odeleite. Here it looks deceptively gentle however upstream there are collapsed banks and flood debris high above the path. Apparently it has in the past destroyed bridges and as we discovered it has also destroyed ford crossings. However I’m getting ahead of myself. I’ll tell you all about what happened at the crossing in a bit, first let me share a map of the route we were hoping to walk.

We’d decided to start in Odeleite by the village pump, the plan to return in time for a beer at one of the small cafes before we drove back. 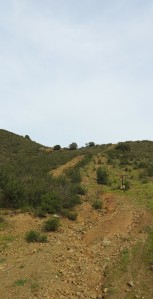 The first three miles of the trail we’d done before when we had explored the stunning trail of nightingales, we were glad this time not to be taking the climb up the slope. Albeit didn’t look quite so bad this year.

Last time we walked through the tiny hamlet of Pernadas not only did the guidebook failed to mention it but I was hot, tired and dehydrated. Consequently hadn’t really thought much about it. This time, fresh at the start of the walk I fell in love with the place. I’d quite happily have a retreat here.

The next mile seemed far longer than I could recall from when we walked it the other direction, and as we approached the ford crossing I could hear the sound of water through the reed beds. I recall mentioning to MrB that I hoped that the falling water was below the ford rather than on or above the crossing. 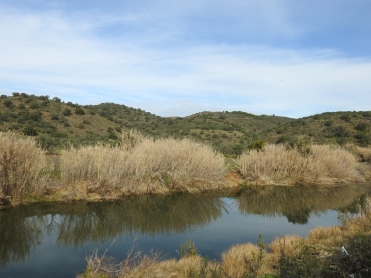 Unfortunately we soon discovered that my hopes were in vain. The ford had been washed away, and it was far too deep for us to cross! We’d only walked three miles and it seemed our circular walk was over. We got the map out and considered other trails, but decided that with the time we had they were all probably too long or too steep. Bitterly disappointed we decided to retrace our steps to another stream and have an early lunch. The lunch was good and with the sound of wild pigs rummaging in the hill behind us I had soon cheered up.

It was though with heavy hearts when we pack up our picnic and started the walk back to Odeleite. We had not gone far from our picnic spot when I saw a trail off to the left. I decided to investigate. And low and behold the locals had created a new driving route to the lower part of the ford. The water though was still quite high and flowing fast, and whilst a four wheel drive would easily make it we were hesitant about trying it on foot. 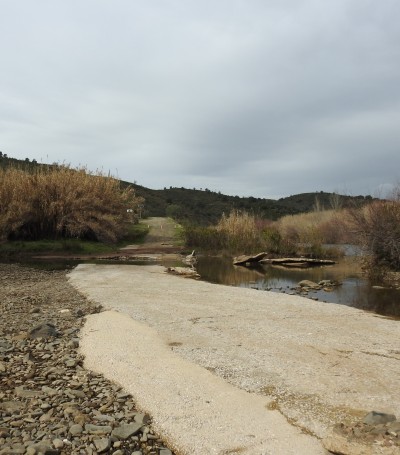 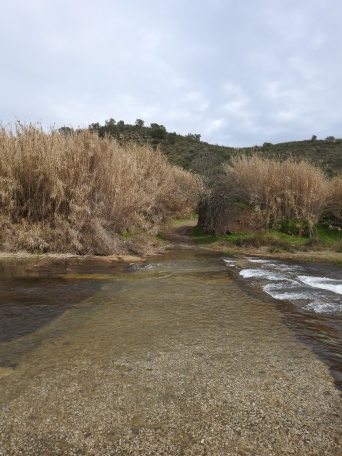 After lots of umming and ahing we decided to go for it. Our feet got very wet, and there were a few seconds when I found myself being moved sideways by the current. But we made it and the circular walk was back on. Well it was once we had dried our feet and found the dry socks in the rucksacks. If only though we had spotted the path earlier as we had lost at least half hour of walking time. Still it had been adventure and more was to come, as at the mouth with the Odeleite we bumped into the shepherd whose flock had blocked the road when we walked ‘other side of the river‘. Today he wanted to chat, and so for a few moments we did in our very limited Portuguese. 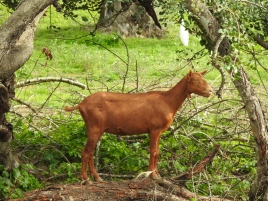 Leaving the sheep behind we walked at a reasonable place for Foz de Odeleite, well we were until MrB spotted birds and I saw the pigs again! That reminds me I must share my pig post one day soon. The pigs were not the only animals on this section. There were dogs and lots of humans too, including tourists in a car. Really hope they were not attempting to get to Tenência as their little hire car would not get them across the river crossing nor would it get them up the new temporary route. It is very stony and muddy, suitable for four wheel drive only. 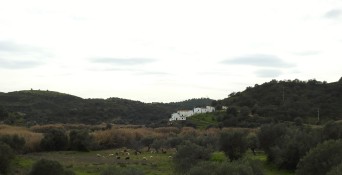 Hopefully the tourists were just out for an explore from Foz de Odeleite. There is a restaurant here which seems quite popular, and perfect for walkers who prefer proper lunches to picnics. We have not been but there is a great review here.

Leaving the tourists behind we headed for the short section on the tarmac road. It cannot be avoided as the only way to get to the other side of the Odeleite is using the road bridge. It isn’t a problem though as this road is very quiet plus the bridge offers a great view of the Rio Guadiana even on a cloudy day.

Having walked downstream for the past 3 miles, we were now going back upstream towards Moinho das Pernada. The promised rain looked as though it might catch us out but we were not too worried as we had raincoats and also on this side of the river there are plenty of places to find shelter. 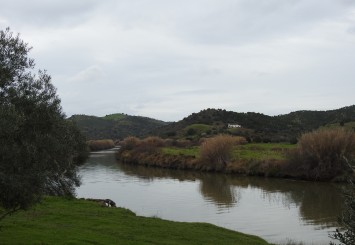 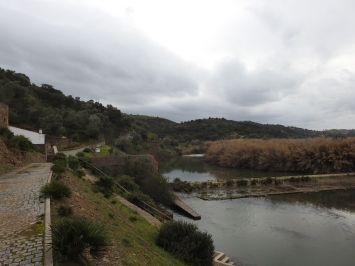 The rain never came, but the locals did. There were three on tractors, one pruning vines, two with their goats and another two working their land. Clearly we were walking past the ‘allotments’ for Odeleite. Everyone said hello as we passed, and best of all we observed a goatsherder managing his goats by name. I never knew goats were so responsive.

It wasn’t just the goats though that were making me relax. Seeing so many locals on foot and even one on pedal bike suggested that our final river crossing would be passable.

I’d been quietly wondering to myself if we’d be ok. And we were, and so our walk came to a gentle end back beside the village pump. Unfortunately though the first river crossing adventure and longer lunch meant we didn’t really have time to stop for a beer in Odeliete. Maybe next time as we’d certainly happily do this walk again in the late spring. We won’t be trying it again before then as there have been even more rainstorms in the past few days and so I suspect the crossing will be challenging to cross by foot for quite a while yet.

However if you are in the Algarve (rather than joining me from one of Jo’s fabulous ‘Monday Walks‘ armchairs) and decide to try this trail in the next few days or weeks, then the new crossing route is at the 3mile marker on my map. Make sure though that you are wearing good walking shoes, have a sturdy walking stick, spare socks, a towel and plastic bags as you will need them all along with a good sense of adventure!

PS If you have not yet discovered the ‘Monday Walks’ armchair gang then do go and say hello. We have a wonderful time walking around the world with Jo and her Monday walkers.

20 thoughts on “A three river adventure in the Algarvian hills”