If you happen to spend some time in the hide at Quinta do Lago then you will almost certainly get to see this gentleman. He is unmissable in his bright yellow plumage.

His Portuguese name is Tecelão-de-cabeça-preta, and we call them Black-Headed Weavers. He is considered an exotic here because, like the parakeets in London, Black-Headed Weavers are a new introduction. I believe it was an accidental introduction with birds escaping from cages – the Portuguese do like to keep song birds :-(. There doesn’t appear to be any detrimental affect on native birds from the colonisation, although in time the cross-breeding between weavers could I guess lead to a new sub-species.

We were only in the hide for about 20minutes as apart from the Weaver there was little to see on this particular day. However he was great fun to watch as he seemed to be heavily promoting his new nest – the green one – to all and sundry. For the whole time we were there he was making lots of noise and performing aerial acrobatics. 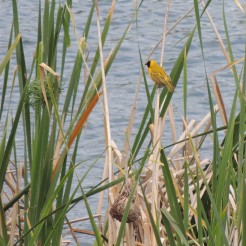 Unfortunately for all his efforts the only attention he got whilst we were there was me taking numerous photographs of him. Hopefully though soon after we left a female Weaver would have visited and been impressed by both his performance and his nest!

The hide we’ve noticed is becoming one of the hot spots for birders in the Algarve, and so if you get your timing slightly wrong you might have to wait for a space on a seat in the room upstairs.

Generally most who visit are true birders who stay quiet or at least keep their quiet chatter to a minimum. Unfortunately though there have been occasions when the chat has not been so quiet, and some have even walked in front of the hide on the lakeside. Hopefully though these irritating incidents will remain a rarity as this is one of the best places to see the Sultana Bird, Little Bitterns and of course the Tecelão-de-cabeça-preta.