When we first visited Lisbon in 2016 Gloria was out of operation and we were unable to travel on all three in a day. So on our return to this beautiful city earlier this year the funicular trail was high on my list of activities. 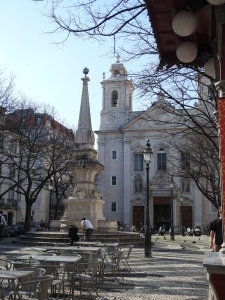 We planned it for the afternoon after our wonderful morning (and lunch) in Cacilhas, which meant of course our first funicular would be the one which is probably the most photographed – Ascensor da Bica. Before we got there though I got sidetracked by a fountain, I blame this new and fascinating attraction with water supplies on our tour the previous day of Lisbon’s water works!

I think I am right in saying that Ascensor da Bica was constructed by Raoul Mesnier de Ponsard and opened to the public in 1892. The gradient is less than 12% so most locals tend to walk up and down rather than wait for the funicular. And for a moment we did consider walking as there was quite a crowd waiting at the lower station on Rua de São Paulo. However I was keen to travel up as we had not used it going up before, and fortunately there was just enough space for us to squeeze on board. 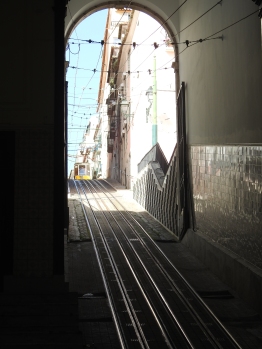 You arrive on Calçada do Combro and if one funicular is enough for you or if the weather is unsuitable for a stroll then this is the point when you can hop directly on board a tram and explore more of Lisbon by tram. There are numerous passing by at this point and they are not too crowded.

We though were on a funicular adventure so made our way through the narrow streets to Miradouro de São Pedro de Alcântara so we could board Ascensor da Glória. There are various routes you can take and you could easily find yourselves not making it as there are so many little streets to explore and even more places to stop for a photograph or a cup of coffee! Fortunately however we remained focused and it was only the lamp-posts that caught my eye.

As you may have gathered from the name Miradouro de São Pedro de Alcântara is a lovely viewing point but for some reason I cannot find any photographs of the view. If you want to discover what it is like you’ll just have to visit yourself! Whatever you do though don’t walk up the street that Gloria travels on. As you may recall in 2016 we did walk up this 18% gradient and our legs are still in recovery! 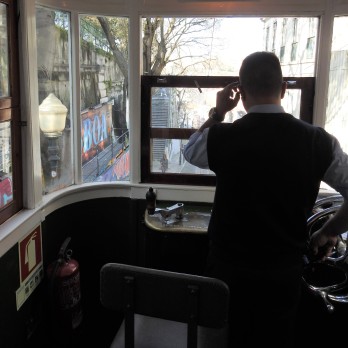 Arriving at the bottom on the western side of Avenida da Liberdade, just off Restauradores square we then made our way directly to the eastern side of Avenida da Liberdade. As it is from here that you board the oldest and steepest funicular – Lavra funicular.  However before we could board I was sidetracked again this time by azulejos. I wonder if it was a dairy before it became a restaurant. 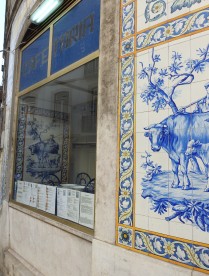 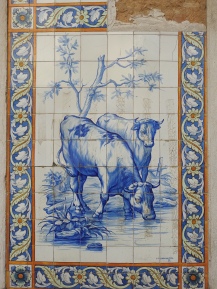 Turning around to join MrB and to board the funicular I discovered that we were going to experience the same problem as we had in 2016!

Yup this time it was Lavra that was temporarily out of action. I was so disappointed not to complete our adventure. We did consider strolling up but it is a 23% gradient and I wanted refreshment!! So we decided to leave it until next year, and headed back to towards Restauradores. I am sorry though not to have completed the walk for Jo and her Monday Walkers. However like Blue Peter I do have one that I did earlier!! So if you would like to know what is at the top then do visit this post from 2016 which includes photographs of the upper station as well as another rather lovely walk at the top.

18 thoughts on “A stroll between Lisbon’s three funiculars”