We’ve known about this PR1 walk ever since we first discovered the back road to Alcoutim, partly because it is in our infamous walking trails book but mostly because you past the way-markers on the road. And it is because of the latter we had not tried it before now. Far too much asphalt we thought, there won’t be anything new we said, how wrong we were! This is an interesting stroll with great views of the Guadiana and surrounding countryside. I say stroll rather than walk as although there are some big ups and downs it is less than 9km in length.

Typically we didn’t begin at the official start as we wanted a coffee at MrB’s favourite Guadiana cafe, it also meant we were breaking up the long section on asphalt. Not that you are on the EM507-2 for long as a new route has been created on what would have been the original right of way. Peaceful, beautiful and we were off the tarmac.

The country tracks brought us to our next hamlet – Álamo. The trail takes you right through this pretty hamlet. Strolling past the communal oven and wash room it is evident that not only is this hamlet full of life but many residents still rely on the more traditional ways of running a home. 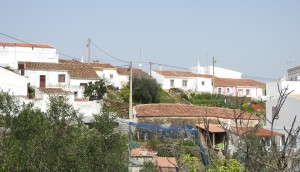 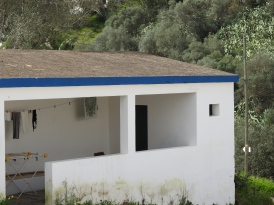 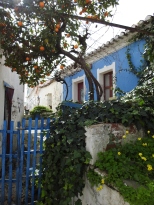 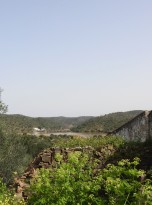 Álamo is on a steep hill, and you certainly notice it as you climb through the back roads onto Curral Velho. Well worth the climb though as the views of the Guadiana are as good as our favourite but longer walk ‘Ladeiras do Pontal Trail‘. 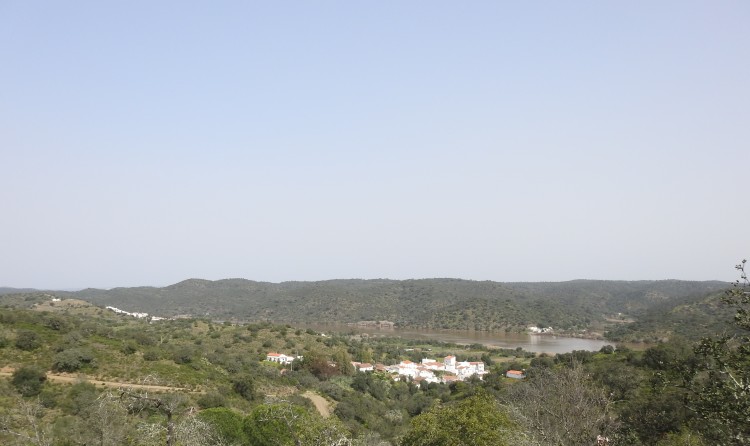 Turning away from the river we headed inland for our third hamlet of this Guadiana stroll – Corte das Donas. The views across the hills was wonderful, and it felt as though we were in the middle of nowhere. It wasn’t long though before we found ourselves caught up once more with rural Algarvian life, including the windmill.

This was our best abandoned windmill yet as nearly everything is still in situ. We wish we had the spare pennies to restore it. Having started in started in Guerreiros do Rio we were now about half way. So after a lengthy explore of the windmill workings, particularly by MrB, we enjoyed our picnic in the sunshine. 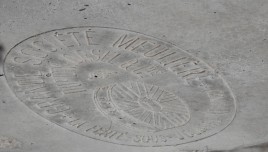 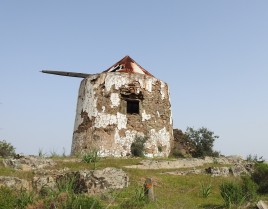 The windmill is on the outskirts of Corte das Donas, a hamlet where it looked as though many of the homes had been purchased by non-Portuguese. However whilst this means the buildings are well-maintained, the hamlet didn’t seem as lively as those on the river. A difficult balance. As we left we found ourselves on more original rights of way, winding through the fields and with dry-stone walls either side. Stunning.

Now well over halfway we were also descending fast as we made our way to the Riberia Laranjeiras and the village of Laranjeiras. Given the name of the river and village, we’d half-expected to be walking through groves of orange trees, but we didn’t! The area though was heavily cultivated with other trees and crops.

As we entered Laranjeiras we noticed storm damage from the extensive rains in mid February.

Fortunately it did not appear that any houses had been affected although clearly the roads and some garden walls had. Most of the residents seem to live here full time and so the village felt very much alive. Although this could also be because of the present of one of the most highly recommended restaurants on the Guadiana. We’d finally discovered the exact of location of Restaurante Cantarinha do Guadiana. We arrived too late for lunch on this occasion and by the looks of it we would have been pushed to have found a table even if we had arrived earlier. It is advised to reserve a table if you want to be sure of having lunch here, especially if you want to sit outside in summer. 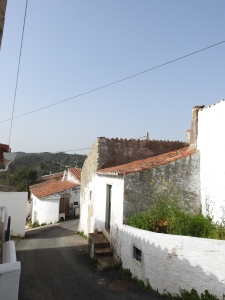 We’ll be back before then though, probably with my mum in April. Hope you have been practising your hill walking Mum! We thought we would start the walk here with you and also begin much earlier so we can build our appetite for what will certainly be a delicious lunch at the end of the stroll. Can’t wait for you to join us Mum as the flora by then will be even more stunning. The trail takes you on a small diversion as you leave Laranjeiras for Guerreiros do Rio. Worth strolling up this section even if you only come to Laranjeiras for lunch as there is a great viewing point above the road. And another excuse for me to play with the panoramic setting on my camera! This is a 360 degree one.

If pushed for time or the weather is unsettled then you could easily miss it out and just stick to the road. I’m so glad we didn’t as if we had we would never have seen these cute piglets. They had escaped their field to sit on the warm rocks, but after watching us for a while decided to head back into the field to join their mum.

If you take the diversion rather than using the road then you are not off the road for long. The trail after running parallel with EM507-2 takes a sharp turn left and down back down to the road. You could in fact remain up on the tracks to Guerreiros do Rio albeit it will be a slightly longer route. We returned to the road route as at the time we weren’t 100% sure you could do that, but we now know for next time if we are feeling adventurous. 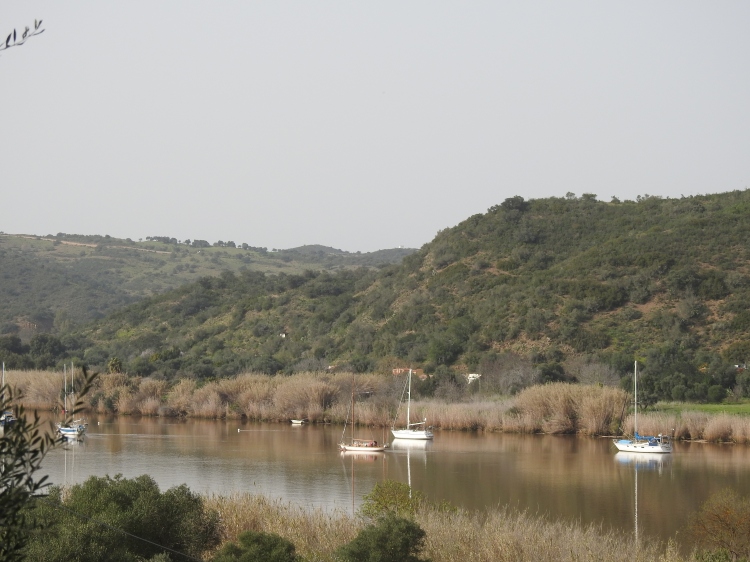 Strolling less than 9km meant we were back where we started by mid afternoon, so as the sun was shining we decided to return to the Bar do Rio for a cool Sagres. Not only was this a lovely way to end our fabulous stroll, but we were following in the footsteps of Restless Jo‘s lovely husband when they explored the Guadiana hamlets a couple of years ago. We will be back soon to repeat this one – the stroll I mean not the beer! Hope you have enjoyed it as much as I have.

22 thoughts on “Exploring the hamlets of the Guadiana”